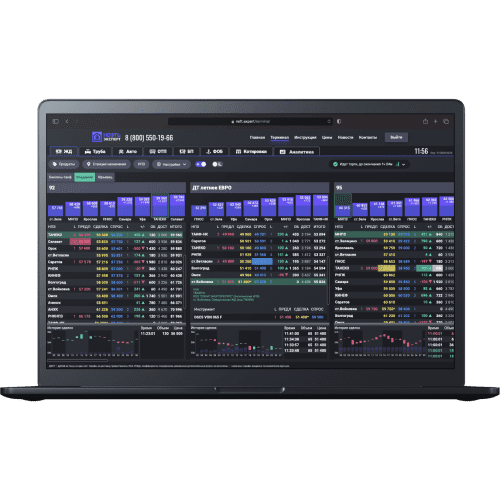 Development of a trading terminal for the St. Petersburg International Mercantile Exchange.

In the first stage, only the terminal had to be developed, while the website was handled by another team. The terminal was successfully developed in its original form and gradually acquired functionality. Over time, it became clear that the site team was not doing a good enough job. After discussions, we took over the development of the site itself as well.

Subscriptions to the terminal and the value of the product for all participants tell us a lot, namely, that the project turned out to be successful and profitable!

Subscriptions to the terminal and the value of the product for all participants tell us a lot, for example, that the project turned out to be successful and profitable!

Review
Customers are satisfied with the service

From the very beginning, the guys showed their competence and willingness to take on our difficult project. During development, there were always solutions that met our needs. Clients of “Oil Expert” are satisfied with the service, we often get positive feedback. In cases of emergency situations, the response to them was timely and everything was resolved as soon as possible. In my more than 25 years of experience in the IT field, I have not yet come across such competent teams. Satisfied with the work, we continue to cooperate!

Want to do a similar project?

We have experience in this industry. We are ready to take on the development.

We are ready to discuss your project

Or write us an email:
info@andromeda-web.site